I’ve known Amphora for a while. My office used to be across the street so I and my coworkers would have lunch there quite often. Now my office is on the east side of Maple Ave., but it’s still close enough that sometimes it’s a lunch option for us.

I rarely, however, order breakfast there so it was a nice change to focus on the breakfast menu. The one thing about Amphora over our previous diners: it has a large and vast menu. Sometimes that worries me because often a very large menu means your meal is less likely to be made from fresh ingredients. Even if that were the case most of our food was good.

This day I ordered the country fried steak, the same thing I had at Bob & Edith’s. I had my eggs over medium as usual. I was in the mood for it considering I was still nursing a hangover from the previous day’s crazy festivities at a holiday party. For me a hangover meal usually consists of something fried and salty. 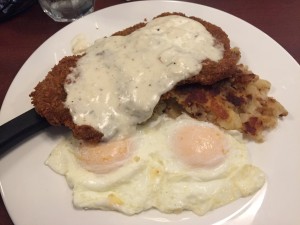 Their menu also included some interesting pancake items: red velvet, peanut butter, and white chocolate. The red velvet that Jen C ordered got good marks but Jen F’s peanut butter pancakes were a little disappointing. They were nothing more than pancakes with some peanut butter chips thrown on top.

All in all Amphora is a good place. It’s large, service is fast, there is plenty of parking, and they have WiFi. The menu is vast and the food is good.